It all started with Artie or A for short.  Artie was born on February 18, 2009 in Tennessee where he lived with his breeder (our friends) until he was about 6 months old. He came into our lives on August 28, 2009 and things have NEVER been the same. Such joy a dog brings….so much joy that we adopted a second less than 4 months later. 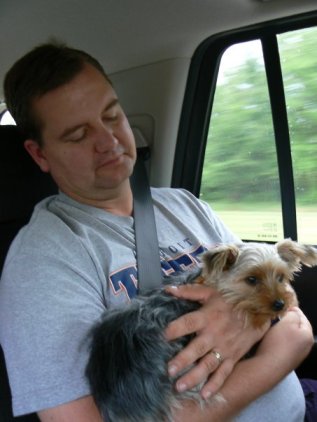 Buddy…yep, that’s what we called him because Artie needed a buddy! He needed someone to play with him, cuddle with him, and sleep with him. Buddy’s litter was a mistake….but not in our eyes. He was meant to come into this world just 6 months after Artie on September 9, 2009. Artie and Buddy are brothers…they share the same DNA because they have the same doggie parents, Beth and Nicky.

It didn’t stop there. I still need to introduce you to the C of the bunch (Coby). We were lucky enough to find Coby from a rescue group. At four months old, we adopted him on January 3, 2015. Although his birthdate is September 11, 2015 and the puppy mill didn’t find him perfect, we love him to pieces.

2 thoughts on “About Us”

Welcome to our blog! My Life with ABC came about when my husband and I adopted three Yorkshire Terriers that we named Artie, Buddy, and Coby. Unfortunately, Buddy passed away in July 2020 but people still recognize them as ABC. And their adventures contiue!